Throughout history, the Sublime Porte used different ways to reward its successful servants. In older times, viziers and other high ranking statesmen were given fur coats, sabers, horse tails and crests whereas brave soldiers who had shown extraordinary merit at the army were rewarded with bejeweled aigrettes. Golden liras were also distributed as a reward.

The first Ottoman medal was established in late 18th century, during Napoleon's invasion of Egypt, when Sultan Selim III created the “Order of the Crescent” to honor Admiral Lord Nelson for defeating the French invasion fleet. However a vast majority of Ottoman orders and medals were created in the 19th century and even then awards were extremely limited. Ottoman orders were fashioned after their European counterparts.

Campaign medals were issued in multiple classes and they were usually gold and silver. Higher classes represented additional recognition after earning the lower classes. Ribbons used for the medals varied widely, but the most commonly used ribbon was red with green border stripes.

Major medals, orders and decorations awarded after 1908 and during the World War are as follows: 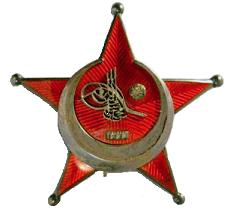 This medal was created with a decree issued on April 1, 1915 and it was an award of military merit for the World War. It was the only Turkish decoration which was not awarded by authority of the Sultan, but rather was authorized by Enver Pasha. The medal was star shaped with ball finials, a raised silver edge and red field in lacquer or enamel. A raised crescent, open at the top, encircled the center of the badge, and inside the crescent is the “tuğra” of Sultan Mehmet Reşad over the date "1333" (1917). It came in two varieties: silvered brass with red enamel or white metal with thin red lacquer. Those issued to officers were enameled, while the plain lacquered variety was issued to other ranks. The statute ribbon was red with white stripes (reverse for non-combatants) and there were also trapezoidal clasps that have been seen, designed to be worn on the ribbon, and bearing the names of various campaigns or theaters of operations during the war.

This medal was issued in 1890 and it was the basic military decoration of the late Ottoman Empire, although it could be to civilians as well. It came in both gold and silver classes, suspended from a red ribbon with narrow green side stripes. On the front side of the medal there was a Turkish coat of arms with the Sultan's “tuğra” above it and on the back side there was the inscription "Medal of Merit Specially for Those Who Have Shown Loyalty and Bravery" and the date 1308 (1890), the date of the founding of the medal. Awards given during the World War had a ribbon clasp of crossed sabers with the year 1333 (1915).

This medal was instituted in 1882 and it came in two classes, gold and silver. The gold medal was the highest ranking military decoration of the Ottoman Empire. On the front side of the medal was a Turkish coat of arms with the Sultan's “tuğra” and an inscription "Relying on Divine Guidance and Assistance, Abdulhamit Khan, Sultan of the Ottoman Empire". The back side had another inscription and a curved rectangular area where the name of the recipient could be engraved, and at the bottom was the date 1300 (1882). Awards given during the World War had a ribbon device consisting of a bar with the year 1333 (1915) above a pair of crossed sabers. 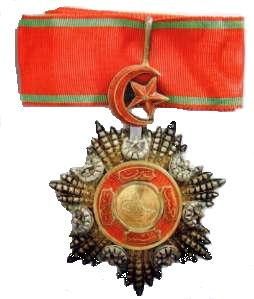 It was established in 1852 by Sultan Abdulmecit I. The order came in five classes, with the highest class limited to 50 members, second class to 150, third class to 800, fourth class to 3,000 and the lowest class limited to 6,000. This limitation did not apply to foreign recipients and many examples were awarded to foreign diplomats and military personnel. The order was a seven-pointed star in silver, with a gold central medallion, around which was a red enameled band bearing four plaques with the words “gayret, hamiyyet, sadâkat” (zeal, devotion, loyalty) and the year 1268 (1852) on the bottom. Between each ray of the star were small crescents and stars. Only orders of the highest class were set with diamonds. During the World War, awards for distinction in military operations were made with crossed sabers as an augmentation to the existing classes of the awards. 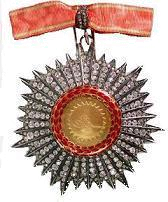 This order was issued in 1831 by Sultan Mahmut II as an award of general merit. It had only one class and the order was a breast badge suspended either by a hook shaped pin or a ribbon. Generally the badge was a circular gold medallion bearing the “tuğra” of Sultan Mahmut II contained in a 16-point star. Surrounding this was a diamond-set badge with a spray of laurel leaves at the bottom. On the top was either a crescent and star suspension device surrounded by silver rays, or a stylized ribbon bow, also set with diamonds. 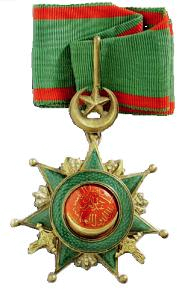 This order was created in 1862 by Sultan Abdulaziz. It was awarded to civil servants and military leaders for outstanding services to the state and came in four classes plus an augmented first class set with brilliants or diamonds. From 1915 until the end of the First World War, all classes could be awarded with sabers when awarded for achievements in military operations. The badge of the order was a seven pointed star in dark green enamel, with three short silver rays between each point of the star. The center medallion was in gold, with a red enameled field surrounded by a green enameled band. In the red central portion is a raised gold crescent, and a calligraphic inscription.

All of the medals pictured here are from the collection of Mr. İsa Akbaş. Photos are taken from "Pride and Privilege" (Eldem, 2004), official book of an exhibition of Ottoman orders, medals and decorations organized by the Ottoman Bank Archive and Research Center in Istanbul.