In 1908, when the constitutional rule was restored, the highest rank in the Ottoman army was “Müşir”, which corresponded not only to “Field Marshal” but also to “Full General”. “Müşir”s were usually army commanders. “Birinci Ferik” corresponded to “General” and “Ferik” was the equivalent of “Lieutenant General”. Prior to 1908, generals of these two ranks used to command units varying in size between army and division. After the constitution was proclaimed, a new unit, i.e. army corps, was created and “Birinci Ferik” generals were appointed to these corps. “Feriks” were assigned to divisions and “Mirliva”s, which corresponded to “Brigadier General” commanded brigades.

Generals were known as “Erkan” in the Ottoman army and they were followed by senior officers, who were called “Ümera”. These senior ranks included “Miralay” (Colonel), “Kaymakam” (Lieutenant Colonel) and “Binbaşı” (Major). Lower ranked officers, going down from Major to Lieutenant, were the “Zabitan” and they included “Kolağası” (Senior Captain), “Yüzbaşı” (Captain), “Mülazım-ı Evvel” (Lieutenant) and “Mülazım-ı Sani” (Second Lieutenant).

Prior to the World War, graduates of the War Academy used to join the army at the rank of Second Lieutenant, but after the war began, two new ranks were added, namely “Zabit Vekili” (Sublieutenant) and “Zabit Namzedi” (Reserve Officer).

With a decree issued on May 21, 1910, the rank of senior captain was abolished; a new system of hierarchy and promotions was established. Officers ranked between sublieutenant and captain were called “Efendi” (such as Lieutenant Ahmet Efendi), those between major and colonel were called “Bey” (such as Major Mehmet Bey) and the generals were called “Pasha” (such as General Ahmet İzzet Pasha).

Until 1908, the main uniform style of the Ottoman army consisted of black cloth and red fez. Later on, the Ministry of War designed new uniforms and they were adopted by the Ottoman Army when the Sultan signed them into a decree. Accordingly, officers and troops were to wear uniforms made of khaki cloth. Officers’ uniforms were to be made of serge clothes and uniforms worn by the troops were to be made of silence clothes. A new cap, called “Serpuş” replaced the fez in the new uniforms, which included a jacket, trousers, a cape, a greatcoat and footwear. 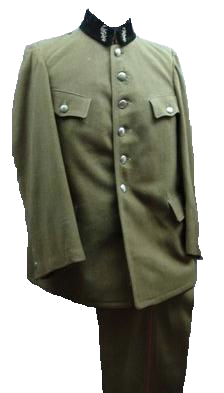 Combatant officers had six gilded buttons on their jackets, whereas other officers including doctors, clerks and industry officers had six white buttons. Jackets worn by ordinary soldiers had 5 buttons made of copper. Collars of all officers’ jackets were 3-4 cm high, with one line of stitches at the edge. Collars of privates’ jackets were plain and could be buttoned up. All the troops and the officers wore a collar patch made of broadcloth coloured respectively to their branch in the army. There were also other insignia on the collars.

Privates wore their regiment and company numbers on their collar patches. For officers, there was only the regiment number. These numbers were made of gilded copper and sewn at 2 cm to the shoulder strap, vertically to the shoulder line.

Jacket sleeves carried a little vent. Buttons attached there had the same colour with those on the chest, but they were smaller in size. Every jacket had four pockets, with similar buttons.

In addition to the jackets for daily use, there were also tunics worn in ceremonial occasions, called “Setre”. They were made of dark blue broadcloth and used in official ceremonies and religious holidays. As a general rule, in occasions where civilians were wearing frockcoats, all the generals and officers were supposed to wear their tunics.

These tunics had collars of 4-6 cm height; in front there was a row of eight buttons and at the back there were two rows of three buttons each. Infantry, railroad, communication, balloon, machine gun, fire brigade, transportation and industry officers had yellow buttons with the crescent-star, whereas staff officers and cavalry officers had plain yellow buttons. Artillery officers had a symbol of two cannon barrels on their buttons. 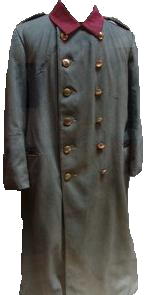 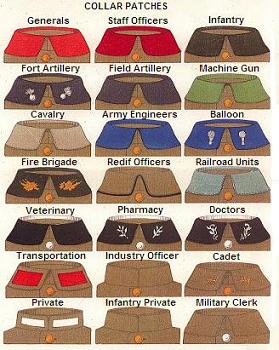 Tunics worn by military doctors were coloured oil green, with white buttons and black collar patches. Collars of tunics worn by general were red and other officers had colours respective of the branch they belonged to.

Greatcoats (called “Kaput” in Turkish) were made of dark grey broadcloth for generals and officers and for ordinary soldiers they were made of silence cloth of the same colour. Officers’ greatcoats had collars of the colour respective of the branch they belonged to.

Capes (called “Pelerin” in Turkish) were made of the same cloth with the greatcoats and they had similar collars, but wearing them was not obligatory for the officers.

An important part of the uniform of the Ottoman army was the cap, which was called “Serpuş”. Ordinary soldiers were wearing khaki caps, whereas officers and generals were wearing caps made of closely-curled grey fur. The top part of these caps had the colour of the respective branch.

Infantry troops in the Ottoman army were wearing puttees, whereas artillery officers and privates were wearing boots. Officers of all branches could also wear patent leather shoes, depending on the occasion. 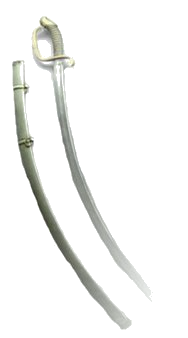 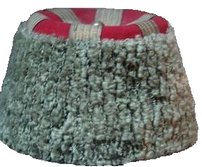 Generals and officers of all ranks were carrying swords, of which the size depended on the rank and the branch. The swords had a yellow tassel made of either wool or leather, attached to the handle. Privates of cavalry and artillery were also carrying swords. Officers also carried a pistol.

The rank of officers was generally shown by the shoulder cords, but there were also some minor distinctive marks in the uniform. The shoulder cords were of universal pattern and they were worn equally with the jacket, the tunic and the greatcoat. They were gilt for combatant branches and silver for non-combatants. The design of the lace was of three different kinds; one for generals, one for field officers and the third for officers below that rank. White stars differentiated the grades within these three groups of ranks.

The minor distinctive marks were increased gold braiding on the cuffs and collar of the tunic for generals and combatant officers; thick (13 mm) gold fringe on the general’s epaulettes, thin (5 mm) fringe on those of field officers and plain epaulettes for officers below that rank. Epaulettes were worn in full uniform on special occasions instead of the shoulder strap.

Non-commissioned officers were distinguished from rank and file by having shoulder straps of distinctive colour for the branch to which they belong. To distinguish the various grades of non-commissioned officers, broad transverse bands were added (gilt for combatant ranks and silver for non-combatant). Sergeants had one band, assistant sergeant-majors had two bands and sergeant majors had three bands. Corporals had no bands. The shoulder straps were bordered with red edging and sergeant-majors also wore a tassel to their side arms.

Minor changes were made in the uniforms with a decree issued on January 27, 1916, however to a large extent; uniforms in the Turkish Army remained unchanged until 1920, when the Turkish Grand Assembly in Ankara launched a different set of uniforms for the new army. 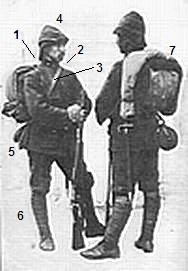 1. Collar same colour with the uniform 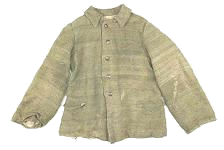 A private’s equipment included a backpack, a bread bag, a canteen, a belt, a bayonet case, a cartridge case, portable shovel and pickaxe, a portable tent, a small piece of carpet (kilim) and a kettle.

The backpack was only distributed to infantry troops who carried their underwear, spare ammunition and food inside. The portable tent and the greatcoat were bound together and attached to the top of the backpack. The canteen, the bayonet case and the cartridge case were attached to the belt. The cartridge case, which was actually in six part, could hold a total of 90 cartridges.