The First World War was one of the deadliest and most tragic events in modern history. For more than four years, two powerful groupings of nations have fought against each other as humanity witnessed violence of a scale unprecedented in history. When the guns were silent again, nine million soldiers and seven million civilians were lying dead. Many millions survived, but life could never be the the same again for them. In fact, things would never be the same for the world.

The Ottoman Empire was said to be the sick man of Europe. This was true, after seven centuries of conquests in three different continents the Empire had shrunk to a large extent. Territories were lost and the Porte was struggling to cope with nationalist movements and a decaying economy, in an futile attempt to keep the Empire intact. There was a weak Sultan on the throne, and the government was in the hands of a political entity called Committee of Union and Progress, which saw an alliance with Germany as the only way out.

The title of this web site is “Turkey's War” although the entity was officially called “Ottoman Empire” in those years, and Modern Turkey was founded in 1923. However we will refer to Turkey and the Turkish Army in this web site due to a number of reasons. For hundreds of years the Ottoman Empire was known in Western countries simply as “Turkey” and its army as the “Turkish Army”. It is also true that during the First World War, Ottoman armed forces consisted primarily of soldiers of Turkish ethnicity, although there were also Arabs, Caucasians, Jews, Armenians, Greeks, Slavs and others fighting alongside with the Turks under the banner of the Sultan. We will talk about the "Turkish army", but honour all who have sacrificed.

Another reason for using “Turkey” instead of the “Ottoman Empire” is that in Turkish culture, the First World War and especially the Gallipoli defense is considered as the occasion that led to the “birth of a new nation”. The war brought the Ottoman Empire to an end and the Republic of Turkey emerged from its ashes. Also, for Turks, the war went uninterrupted for ten years, starting with the Turkish-Italian War in Libya, then the Balkan Wars, the World War and finally the Independence War. In other words, it was indeed “Turkey’s War”.

There is plenty of work written about the First World War; volumes of books, documentaries, diaries, poems, novels… However there is a very serious lack of resources, which tell the story of the war from the Turkish point of view. Most of the available sources are written in Turkish language and therefore inaccessible to researchers and history enthusiasts from other countries, since very few of them are translated into Western languages. The fact that the Turks was using the Arabic script in those years makes the problem even bigger because some of the sources are inaccessible even to Turks, who have not received special training in Ottoman script. This is a pity because given the overall backwardness of the Empire, the Turkish record in First World War was an astounding achievement, which was, far from being a sideshow in the Great War, had decisive ifluence on the outcome of the conflict. It should be studied not just by Turkish speakers, but the whole world.

This is why I have decided to launch this web site. I want to tell the story from a Turkish point of view. You will find in this web site details about Turkish armed forces, its battles, important personalities and lots more. Many people still think that the Turkish involvement in the First World War has been limited with the defence of Gallipoli. However, Turks have fought in many different fronts, and there are many more stories to tell.

This is by no means a professional website.  It is authored and updated as spare time permits and it is intended for a general rather than academic audience. Therefore it is not recommended that this site be used for academic reference purposes for academic papers.  This is does not mean that there is a lack of confidence in the overall accuracy of the site's content, rather it is an acknowledgement that material on the site has not been submitted for formal peer review.

Feel free to share your comments and suggestions with me. This site is open to everyone who wants to make a contribution. Please keep in mind that this site, like other sites with similar topics, is aiming at sharing knowledge and paying tribute to those who have suffered. People who use the past to breed hatred, people who abuse history for their own chauvinistic purposes are not welcome. If that is what you want, please choose other places, not this web site.

This site will be under continuous construction. I will add new material whenever I have the chance to do so. 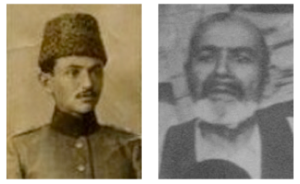 Major Mehmet Ziya Bey (1888-1944), who fought in the First World War at the Caucasian front as an officer of the Ottoman Army…

Göde Ali (1887-1956), who was one of the resistance leaders in Maraş region against French occupation…

May they rest in peace.