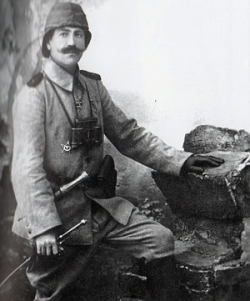 Reşat was born 1879 in Istanbul. He graduated from the Military Academy in 1896, and started his military career as a team commander in the 65th Regiment of the Third Army. In 1910 he took part in Ottoman military efforts to suppress the rebellion in Albania, served in the military tribunal there, and in 1912 he made another tour of duty in Albania. He fought in the Balkan Wars with the Western Army, and his successful performance during the defence of Ioannina brought him the rank of major.

When the First World War broke out, Reşat Bey was a battalion commander with the 70th Regiment, and after the Ottoman Empire officially entered the war, his unit was sent to Gallipoli. Between June 1915 and the end of hostilities on the peninsula in January 1916, he fought in Gallipoli, got wounded in Seddülbahir, but returned to the battlefield after a short treatment and recovery period in Istanbul. After Gallipoli, he was first deployed to Baghdad, but soon afterwards he assumed the command of the 17th Regiment. He remained in this post until the end of 1917, and in this capacity he took part in battles against the Russians.

In the first half of 1918, Reşat Bey served in Istanbul, as the Head of Military Police in Üsküdar. His stint away from the battle field would only take seven months and in July 1918, he returned to active duty, as the commander of the 53rd Regiment attached to the Yıldırım Group of Armies in the Mesopotamian theatre of war.

On September 21, 1918, Reşat Bey’s unit received an order to capture the ridges around Masashana. During a reconnaissance mission on the night of September 22/23, Reşat Bey has his staff were taken prisoner by the British cavalry. Reşat Bey spent the next one year interned at the Sidi Bishr camp near Alexandria in Egypt. He was released on November 23, 1919, returned home, refused the offer to serve on the military tribunal in Istanbul and joined the liberation movement in Anatolia.

During the Turkish War of Liberation, Reşat Bey fought in several different fronts, and was promoted to the rank of colonel in Macrh 1922. The next month he was appointed as the commander of the 57th Division. On August 27, 1922, Reşat Bey received the order to capture Çiğiltepe near Afyon in the Western Anatolian front. The division could not achieve the target on time, and the mission was a failure. His pride hurt deeply, Reşat Bey committed suicide. He was buried near the battlefield in Sandıklı, and in 1988 his remains were moved to the State Cemetery in Ankara.