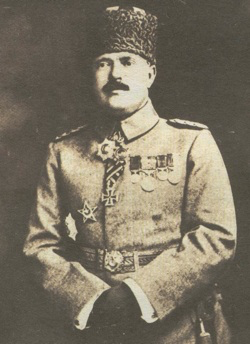 Süleyman Faik was born 1876 in Köprülü, modern-day Veles in Macedonia. He graduated from the War College in 1900 and joined the Third Army. During the Balkan Wars, he first served as the deputy commander of the 10th Division and later as the commander of the Shkoder Division.

In 1914, before the Ottoman Empire’s entry to the war, Süleyman Faik was made a general and appointed to the command of II Corps. With this corps, Faik Pasha served in Gallipoli, took part in the battles of Zığındere. After Gallipoli, the II Corps saw action in the Caucasus agains the Russians.

On August 30, 1916, early in the morning, Süleyman Faik Pasha ordered his troops to launch a bayonet charge in the vicinity of Oğnut near Bingöl. He was with the men, leading the attack at the front, when he was hit in the head by an enemy bullet and lost his life.