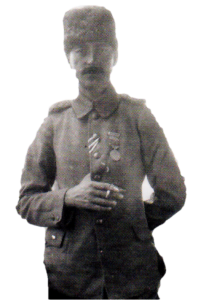 Halil Pasha is Enver Pasha's uncle, although he is one year younger than him. He was born in 1882 in Istanbul and graduated from the War Academy in 1905. For three years following his graduation he served with the Third Army in Macedonia, where he joined the Committee of Union and Progress (CUP). When the constitutional order was restored in 1908, the CUP sent him to Iran to organise dissidence against the Shah, but after the uprising of April 13, 1909, he was called back and became the commander of the Imperial Guard.

Later in 1909, he was sent to Salonica to command the mobile gendarmerie units in the region. He took active part in the Turkish-Italian War in Libya and the Balkan War and for a brief period of time he served as the commander of the gendarmerie regiment in Van. When Turkey entered the World War, he was working at the High Command in Istanbul. In 1915, he served in Mesopotamia; in 1916, he was with the Tigris Group of Armies; in 1917, he commanded the Orient Group of Armies and later he was the commander of the Caucasus Army. In 1915, he was the commander of the Turkish forces capturing Kut in southern Iraq and taking General Townshend prisoner. After this successful campaign, he was promoted to General.

Halil Pasha returned to Istanbul when the armistice was signed. He was arrested, but he managed to escape from the prison and moved to Anatolia where he had contact with Mustafa Kemal. Halil Pasha then went to Azerbaijan to fight against the Armenians. He wanted to settle in Turkey, but since he was not allowed to do so, he first went to the Soviet Union and in 1922 when Enver waged war against the Bolsheviks, he left for Germany. After the War of Liberation was won and the Republic of Turkey was proclaimed, the government granted him a special permission to enter the country. For the rest of his life, Halil Paşa lived in his homeland, without getting involved in politics. He passed away in 1957 in Istanbul.