Mustafa Kemal was born 1881 in Salonica, as the son of a minor official who became a timber merchant. In accordance with the then prevalent Turkish custom, he was given the single name Mustafa. His father, Ali Rıza, was a customs officer who died when Mustafa was seven. As such, it was left to his mother Zübeyde Hanım to bring the young Mustafa up. Four of the five siblings of Atatürk died at early ages and only one sister, Makbule (Atadan) survived, and lived until 1956.

When Mustafa was 12 years old, he went to military schools in Salonica and Monastir, then centres of anti-Turkish Greek nationalism. Mustafa studied at the military secondary school in Salonica, where the additional name Kemal was bestowed on him by his mathematics teacher. Mustafa Kemal entered the military academy at Monastir in 1895. He graduated as a lieutenant in 1905 and was posted to the Fifth Army in Damascus.

In Damascus, he soon joined a small secret revolutionary society of reform-minded officers called “Motherland and Liberty” (Vatan ve Hürriyet), and became an active opponent of the Ottoman regime. In 1907 he was posted to Salonica and joined the Committee of Union and Progress commonly known as the Young Turks. He was the staff officer of the "Liberation Army" (Hareket Ordusu) which entered Istanbul on April 19, 1909 to put down a revolt. He was sent to Paris in 1910 where he attended the Picardie Maneuvers and the next year he started to work at the High Command in Istanbul.

In 1911, he went to the province of Trablusgarp (modern-day Libya) to take part in the defense against the Italian invasion. When the Balkan War started in October 1912, Mustafa Kemal joined the battle with units from Gallipoli and Bulair. His contributions to the recapturing of Didymoteicho and Edirne (formerly Adrianople) were considerable. In 1914, he was assigned to Sofia as a military attaché, partly to remove him from the capital and its political intrigues. While still at this post, he was promoted to the rank of lieutenant colonel. His term as an attache ended in January 1915. By that time the First World War had started and the Ottoman Empire was inevitably involved. Mustafa Kemal was posted to Tekirdağ with the assignment of forming the 19th Division.

Mustafa Kemal played a critical role in the battle against the allied British, French and ANZAC forces during the battle at Gallipoli during 1915, where he held off allied forces at Conkbayırı and on the Anafarta hills. For this success, he was later promoted to the rank of Brigadier General, thus acquiring the title of “Pasha” and gained increasingly greater degrees of influence on the war effort. Mustafa Kemal gained much respect from his former enemies for his chivalry in victory; the “Mustafa Kemal Atatürk Memorial” has an honoured place on ANZAC Parade in Canberra, Australia. It includes words attributed to him: “Those heroes that shed their blood and lost their lives... you are now lying in the soil of a friendly country. Therefore rest in peace. There is no difference between the Johnnies and the Mehmets where they lie side by side here in this country of ours... You the mothers who sent their sons from far away countries wipe away your tears. Your sons are now lying in our bosom and are in peace. Having lost their lives on this land they have become our sons as well.” 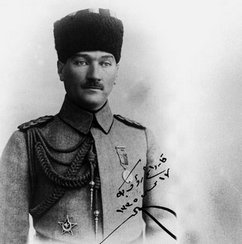 During 1917 and 1918, Mustafa Kemal was sent to the Caucasus front to fight against Russian forces, against which he had some success. He was later assigned to the Hejaz to suppress the Arab Revolt (which was supported by Great Britain) against Ottoman rule. After resigning his commission, he eventually returned to serve in the unsuccessful defense of Palestine. In October 1918, Turkey capitulated to the Allies, and Mustafa Kemal became one of the leaders of the party in favour of defending the area roughly occupied by present day Turkey, while agreeing to withdraw from all the other territories.   When, following the Armistice of Mudros, Allied nations started to disband the Turkish armies, Mustafa Kemal went to Samsun on May 19, 1919. With the circular he published on June 22, 1919 at Amasya, he declared that "the freedom of the nation shall be restored with the resolve and determination of the nation itself" and called the meeting of a congress. He convened the Erzurum Congress during July 23-August 7, 1919 and the Sivas Congress during September 4-11, 1919, thus defining the path to be followed towards the freedom of the motherland.

Mustafa Kemal was met with great enthusiasm in Ankara on December 27, 1919. With the initiation of the Turkish Grand National Assembly on April 23, 1920, a significant step was taken on the way to establishing the Turkish Republic. Mustafa Kemal was elected as the head of the national assembly as well as the head of the government. The Grand National Assembly started to put into effect the necessary legislative measures so as to enable the War of Liberation to come to a successful conclusion. 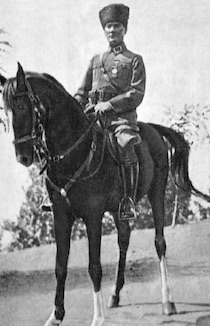 The Turkish War of Liberation started with the first gun shot on May 15, 1919 during the Greek occupation of Izmir. The fight against the victors of the First World War who had divided up the Ottoman Empire with the Treaty of Sevres signed on August 10, 1920, initially started with the militia forces called Kuvayi Milliye. The Turkish Assembly later initiated a regular army and achieving integration between the army and the militia, was able to conclude the war in victory.

On the military front, the conflict between nationalist movement and the Allied powers went on three fronts. Which one of them with the Greece (west front), where the Turkish forces fell back in good order to the Sakarya river, just 80 kilometers from the Grand National Assembly. Mustafa Kemal took personal command and decisively defeated the Greeks in the twenty day Battle of Sakarya in August-September 1921. Final victory over the Greeks came in the Battle of Dumlupınar in August 1922.   On the political front, Mustafa Kemal signed the Treaty of Kars on October 23, 1921 with the Soviet Union, a treaty of friendship in which Turkey ceded the city of Batumi, in present-day Georgia, to the Bolsheviks in return for sovereignty over the cities of Kars and Ardahan, which were lost to Tsarist Russia in the Turkish-Russian War of 1877-1878.

The victory in the War of Liberation assured Turkey's sovereignty. He ushered the Treaty of Lausanne, signed on July 24, 1923, through which Turkey finally entered a period of peace after a disastrous decade of warfare. On October 29, 1923, the Turkish Republic was formally proclaimed and Mustafa Kemal was unanimously elected as its first President. The young republic began to grow on the twin principles of "Sovereignty unconditionally belongs to the nation" and "Peace at home and peace abroad".   Mustafa Kemal spent the next several years consolidating his control over Turkey and instituting a variety of wide-ranging political, economic and social reforms. He undertook these reforms to "raise Turkey to the level of modern civilization." 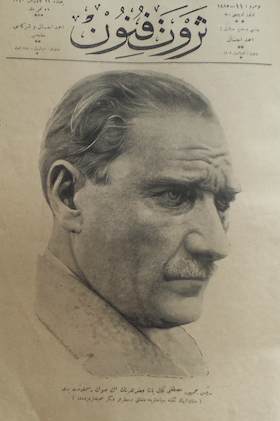 Atatürk's view of culture included both his own nation's creative legacy and what he saw as the more admirable values of world civilization, and he put an emphasis on humanism above all. He once described modern Turkey's ideological thrust as "a creation of patriotism blended with a lofty humanist ideal."

So as to assist in the creation of such a synthesis, Atatürk stressed the need to utilize the elements of the national heritage of the Turks and of Anatolia—including its ancient indigenous cultures—as well as the arts and techniques of other world civilizations, both past and present. He emphasized the study of earlier Anatolian civilizations, such as the Hittites, Phrygians, and Lydians. The pre-Islamic culture of the Turks became the subject of extensive research, and particular emphasis was laid upon the fact that—long before the Seljuk and Ottoman civilizations—the Turks had had a rich culture. Atatürk also stressed the folk arts of the countryside as a wellspring of Turkish creativity.

The visual and the plastic arts—whose development had on occasion been hindered by some Ottoman officials claiming that the depiction of the human form was idolatry—flourished during the presidency of Atatürk. Many museums were opened; architecture began to follow more modern trends; and classical Western music, opera, and ballet, as well as the theatre, also took greater hold. Several hundred "People's Houses" and "People's Rooms" across the country allowed greater access to a wide variety of artistic activities, sports, and other cultural events. Book and magazine publications increased as well, and the film industry began to grow.

According to the Law on Family Names, the Turkish Grand Assembly gave the name "Atatürk" (Father of Turks) to Mustafa Kemal on November 24, 1934. He was elected as the Speaker of the Grand Assembly on April 24, 1920 and again on August 13, 1923. This was a position equal to that of the president as well as the prime minister. Republic was proclaimed on October 29, 1923 and Atatürk was elected as the first President. Elections for President were renewed every four years according to the Constitution. In 1927, 1931 and 1935 Turkish Grand Assembly again elected Atatürk as the president.

Atatürk took frequent trips around the country and inspected locally the works undertaken by the state, giving directives where problems were faced. As president he was host to visiting foreign presidents, prime ministers and ministers. He read his Great Speech, which covers the War of Liberation and the founding of the Republic on October 15-20, 1927, and his 10th Year Speech on October 29, 1933.

Atatürk married Latife Hanım on January 29, 1923. They took many trips to different parts of the country together. This marriage lasted until August 5, 1925. He adopted girls named Afet (İnan), Sabiha (Gökçen), Fikriye, Ülkü, Nebile, Rukiye and Zehra and a shepherd boy named Mustafa.