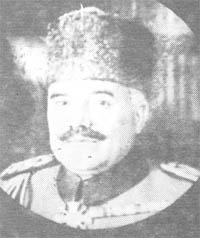 Zeki was born in 1862 in Aleppo, and, referring to his hometown, he is also known as Halepli Zeki Pasha. After graduating from the War Academy in 1886, he served for the Imperial Guard and the Ottoman General Staff. During the Turco-Greek War of 1897 he was with the Army of Alasonia. He became a general in 1900 and afterwards, until the First World War he undertook several posts, including commander of the fortified zone of Edirne, Governor of Mosul, commander of the 2nd Division and commander of the Army of Vardar.

As the First World War broke out, Halepli Zeki Pasha was the commander of the Fourth Army. However, he did not stay at that post for a long time. On November 21, 1914, he was appointed as the Ottoman liaison officer to Kaiser Wilhelm II and went to Germany. He would remain there until the armistice in 1918. Between October 23, 1920 and November 1, 1922, Zeki Pasha served as the Chief of General Staff and retired from the army in 1923. Halepli Zeki Pasha passed away in 1943.