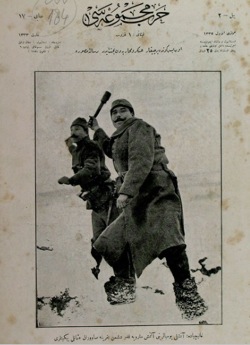 The participation of Turkish troops in the Eastern European theater of war is a subject often overlooked and considered as a simple detail in the story of Turkey in the First World War. Many people, including Turks themselves, would think that Turkish troops only fought on the Empire’s own territories. However, this was not the case; they did not only fight on their own soil. Nearly 100 thousand Turkish troops were sent to the Eastern European front in 1916 in order to support the Central Powers efforts against the Russian army. Although they played an important role in the European fronts, one cannot help thinking that these troops, which were chosen from among the crème à la crème of the Ottoman Army, could be used in more efficient ways, i.e. in fronts where they were needed to protect the motherland.

There is no consensus among Turkish sources about the origins of Turkish participation in the European Eastern Front. In his colossal biography of Enver Pasha, Şevket Süreyya Aydemir argues that Turkey’s allies have not demanded troop support and in fact, Enver’s proposals to send troops were rejected by the German Chief of Staff General Falkenhayn. He states that Falkenhayn’s successor, Hindenburg, agreed, however with some doubts. Other writers claimed that Germany had plans of drawing Turkish troops to European fronts since the beginning of the war and those plans were agreed on by Turks. War plans drafted by General Bronsart von Schellendorf, the German chief of the Ottoman general staff, and issued on October 7, 1914, included points such as Turkish support to the Bulgarian army, Turkish attack on Romania and Turkish landing in Odessa and Crimea.

The fact is that in summer 1916, after the Brusilov Offensive, Central Powers had a significant manpower deficit in the Eastern front and an urgent request was made by General Falkenhayn who asked the Turkish High Command to supply troops in order to support the Central Powers' war efforts in this theater of war. Austrians were not very comfortable with this decision, but they were persuaded by the Germans, who believed that Turkey had a surplus of available divisions, especially since the Gallipoli campaign was over. As a result of the agreement with the German High Command, Turkey decided to send its XV Army Corps to Galicia, XI Army Corps to Romania, XX Army Corps and 177th Infantry Regiment to Macedonia.

Turkish troops sent to Europe had a different appearance compared with those who were defending the homeland. These divisions were comprised of the elite officers of the Ottoman Army, and the troops were young, well-built and well-equipped. Enver Pasha wanted the best of the Ottoman Army to serve in the European fronts, but this was done at the expense of taking away the manpower from the units fighting to defend the Turkish homeland.

The total number of Turkish troops served in the European Eastern Front vary between 117,000 and 130,000 according to different Turkish sources. Nearly 8,000 of them were killed in action with another 22,000 being wounded. An interesting note about Turkish involvement in European theater of war is mentioned by Şefik Ertem, who states that Turkey's allies have asked the Ottoman government for to pay for all expenses related to the participation of Turkish troops in the Eastern European theater of war. These expenses even included ammunition, food and medical material. While this it is true to a large extent that sending troops to Europe involved certain financial costs, support from Turkey's allies in the form of equipment and armaments should not be neglected. 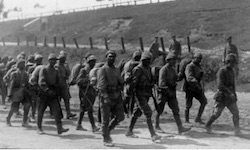 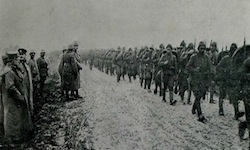 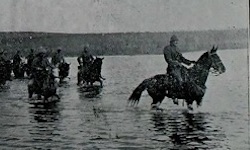